On Sunday 21 July 2013 I went to my favourite nature reserve in Tring with the aim of having a go at some butterfly photography. Last time I did this was with film, when every time you pressed the button it cost you! Now of course, you can press to your heart’s content and while away the wee small hours Photoshoping till dawn…

There were 100s of marbled whites, so many that after a bit 3 or 4 flying around each other in a territory dispute hardly raised an eyebrow –  “Oh, look more marbled whites…”  Weirdly as soon as you go through the gate of the reserve, there they are all over the place, and as you leave its as if they never existed. There must be some kind of force field keeping them in, or maybe they can read.

They are busy little chaps, not stopping  much, and when the do it tends to be low down in the grass so the first you know they are there is when they fly up and its too late for a photo.  So you take a lot of pictures, and then delete a lot. 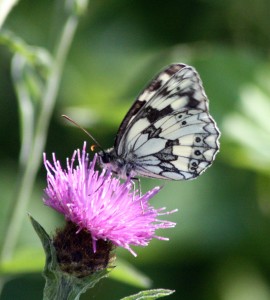 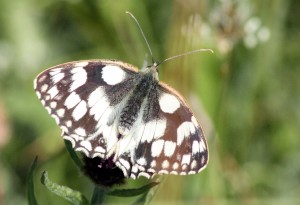 I was really there looking for fritillaries – I haven’t seen one in years and years. Wandering around the meadow I saw a large, fast flying butterfly patrolling round the perimeter. Almost defo a frit of some sort, but maybe a comma – couldn’t be sure. 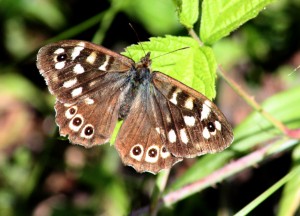 Whilst looking for the frits I saw lots of other species – ringlets, skippers, brimstone, browns and this rather fine speckled wood – which is really a very common, but underrated butterfly.

That’s great, but this is what I came for… 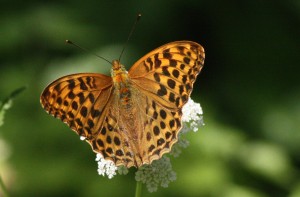 I wandered off to a ride where I came across 4 or 5 of those fast flying “I am sure they are frits” again. The ride was really not that long, and these guys were zooming around and around like they were at Silverstone…  A couple of these flitted around my feet, and often they flew within a meter of my face. They hardly flap their wings, seeming to glide and just hang in the air.  But were they Dark Green, Sliver Washed or (dare to believe High Brown?) 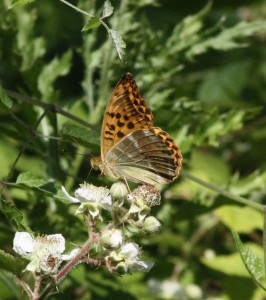 Eventually one landed on a bramble and I took lots of pictures, including the definitive under wing which proved they were silver washed. Within a minutes it was off again. I saw a group of four spiraling up and up. There is something ethereal about these woodland species, at times I could have reached out and touched them as they flew by. Stunning.

One reply on “Return to Butterfly Photography”

Love your photos of the butterflies